Recently we lost our beloved Blue French Lop after her second kidney went into failure,

her other was removed 4 months earlier in the hope she would manage with one. The nephrectomy was successful and gave Topsy the happiest period of time in her life, the binkies she threw after recovery when she got home will stick long in the memory, she loved life, treasuring every moment with Husbun Muse, foraging in the garden and being stroked and fussed over. We had only rescued Topsy 12 months prior to being euthanised.

We had no confidence in their assessments and decided to pursue further with our own reliable vet and own finances. Topsy’s ear was micro-stitched & both were spayed. Unfortunately, the bond between Fudge & Topsy was now broken and the two were better off in the 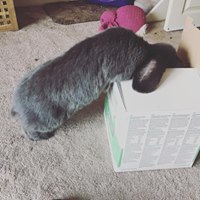 long run to be bonded with males. Fudge was rehomed as a house-rabbit and bonded, we were heartbroken to let her go.

It did not take long for Topsy to settle in & we totally fell in love with her, such a gentle giant who just craved affection. Often we would find her flopped onto her side, clicking her teeth, twitching

bunnies in the home. He was kindly delivered to us, driven 180 miles! We renamed Thumper, Muse, he & Topsy bonded in a matter of hours. We were so happy for Topsy, she was besotted, gazing at him as if all her Birthdays had come at once. To be fair Muse is the Brad Pitt of the Bunny World.

Despite things seemingly going well for Topsy, I was

concerned about her movement & phases of hunching. It was always in my mind that there actually were spurs troubling her & kept getting her teeth checked but dentals were coming back fine. Then the dreaded day came when we noticed blood in her urine. Emergency rushed to the vets, her kidney functions were critically low and a large mass was visible on an ultrasound, but was not particularly clear, therefore, they referred her to one of the best exotic vets in the UK, where she stayed with Muse, her big moral support, who spends the whole time shaking (he’s a bit of a wimp), whilst Topsy is calm as you like giving blood & being checked. 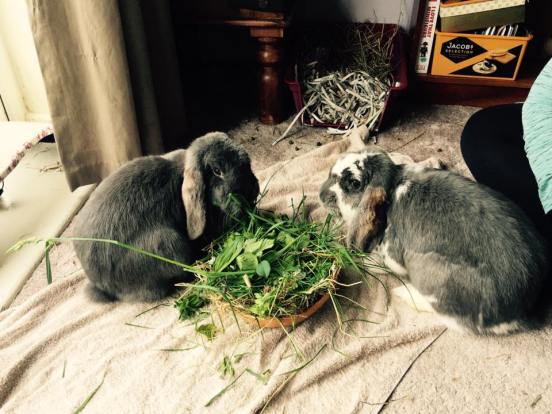 The result of a detailed ultrasound revealed that one of her kidneys had calcified and had slowly extended to the size of a cricket-ball rather than its normal golf-ball size, causing hydronephrosis. The awful result of her previous poor diet & husbandry, the news was heart-breaking. All I

could think was they are going to suggest that she had to be euthanised. However, the vet suggested they could remove the kidney and that she could still live in good health and with no pain. We just wanted so much to make her better.

The operation was a success, such relief for us, I even called the kids at school to pass on the

message, we had all been so worried waiting for the call. We expected a long recovery time. Within 48 hours she was like a new bunny, she hopped like never before, she binkied round the garden. It was such a joy to watch. The operation gave Topsy an opportunity to live pain free, the happiest I have ever seen a bunny, she did not waste a second, she didn’t let Muse lick his foot without her head being pancaked in the way for a

wash, you could not pass until you had petted her, she mowed the grass daily & pruned all the flowers. It was beautiful to watch. She loved life so much, her personality was totally infectious, everybody loved her.

Then one day she was not herself, it was evening so we went to a late night vet, told her

Topsy’s history. She gave us medicine for her tummy suggesting it was a poorly tummy. This we had to force feed her, which she hated, we also fed her recovery a few times daily so she did not go into Gut Stasis. Two days in and it appeared she had somewhat recovered, we felt immense relief. However, the following day she was clearly distressed & we decided to take her back to the specialist vet along with Muse. We just knew it was her kidney.

A scan showed her remaining kidney had also enlarged and was not coping on its own and tests confirmed her kidney was failing. This time there was no other option, nothing all the money in the world could do to help her. It was the hardest decision to make, keep

her alive in pain or put her out of her misery. Something I find so difficult is that I do not believe in an afterlife and therefore, believe that when you are gone, you are gone, 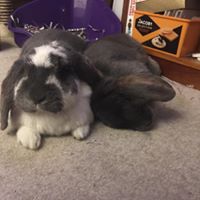 there is no way back and therefore, would always do all I can to prolong life in animal or human if there is just a glimpse of hope and that they can experience some form of happiness again. We could not let her go before because it was so clear her life & happiness outweighed the pain she was suffering. But this was different. Everything felt like it happened so quickly, despite the vet giving us all the time in 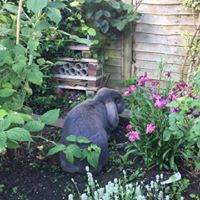 the world. We had to accept there was no more we could do. I felt as if my heart had stopped as we hugged her for the last time, I was trying to hold it together for her but 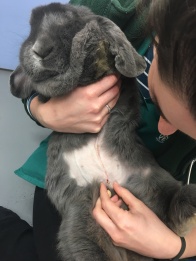 could not. Her teeth clicked away at my chest, she was not a bunny that had ever liked being picked up, but she cuddled up to me and just gave us the loveliest cuddles, it felt as if she was telling us that she knew we had tried our best and that she was so grateful for everything, yet I could not help feeling like we were letting her down. She snuggled with Muse whilst she was given a sedative & then the final injection.

The vet was trying to tell us about cremation but I could hear nothing. We left her wrapped in a blanket and brought Muse home. It was a late night. The next day we felt awful about leaving her there and my partner went to collect her.

She looked so peaceful and so beautiful even in death. We let Muse spend some time with her so he could understand. He gave her a wash and said goodbye, it was incredibly sad. She was then buried in one of her favourite parts of the garden. We planted a Rose above her suitably named ‘Blue for You’.

A few weeks later we were contacted by the lady who had adopted her sister to tell us Fudge (Flo) was at the vets in a critical condition due to her kidney failing. She passed away that evening. It seems from the day they were born, to growing up in a hutch unable to move, to the rescue centre wanting to euthanise, Topsy having her ear ripped & the nephrectomy that these beautiful innocent creatures that gave nothing but love just were not given a fair chance. 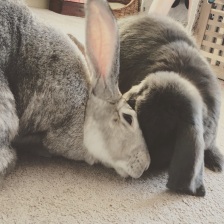 At the time sadness is so overwhelming that it is difficult to see anything positive, however, we gave Topsy a chance to live happily and be free, that she would not of had. Even for that short time she had such an impact on our lives, as we hope we had on hers. We know Fudge (Flo) received just as much care as we provided for Topsy.

It cannot be said a month later I feel any less pain looking back, she became such a huge part of our family and I know Muse misses her so much, he often sits by her rose, knowing this is where she was laid to rest. Of course, we have had to re-bond him now as she would not wish f

or him to be lonely. If I am honest I cannot believe how sad I am about her loss, I guess it is much harder because of how young she was taken, when it seemed she had her whole life was

ahead of her and with us it had only just begun.

I can only hope I am wrong about an afterlife (of course we say for bunnies crossing the rainbow bridge) and that these gentle giants are reunited and binkying as freely as they wish.